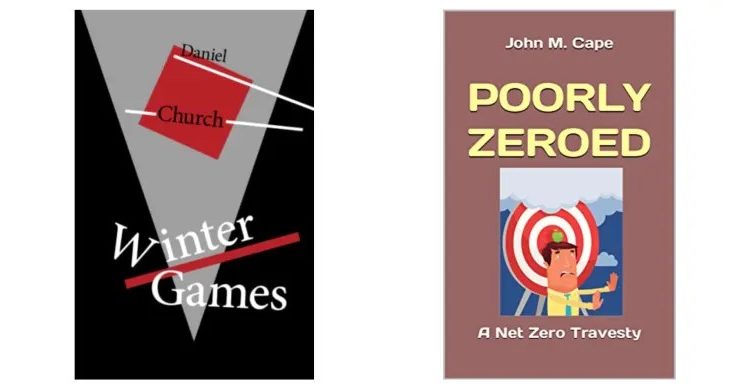 The trigger for this particular post is that a few weeks ago the authors of two new books emailed me copies of their books. What particularly struck me is that these two books are each based on a theme of net zero emissions. In fact, they define a new subgenre of cli-fi: net-zero fiction that explores how the rapid elimination of fossil fuels has become deeply problematic. Both books depict skeptical scientists determined to make a difference against overwhelming odds. The moral of these stories is that a rapid transition to net-zero emissions will do far more harm than the carbon emissions themselves.

This topic couldn’t be more topical.

Daniel Church is a pseudonym, I don’t know his real name, but it is obvious that he has spent a lot of time in science and is knowledgeable in geology/geophysics.

From the summary on amazon.com

“Daniel Church’s thriller is very much in the tradition of Michael Crichton. Winter Games introduces readers to a passionate group of scientists sacrificing themselves to save millions of people whose lives are threatened by the cold. As the story progresses, it becomes clear that a public relations guru is behind much of the public’s misperceptions about the climate, and hence much of the suffering. The question is if he is too powerful to be defeated.”

In terms of plot and setting, the year is 2027, and desperate climate scientists are filming themselves dying in rooms maintained at Earth’s average temperature – 59 degrees Fahrenheit (with some wind created by a fan) — in an attempt to communicate some simple facts about science and protecting the vulnerable from the ravages of fuel poverty. The climax scene at the NASA GISS in New York City (with a cameo appearance by Tom’s Restaurant of Seinfeld) is surprising and shocking.

I was invited to write a blurb for the book: “Winter Games brings to life the threats of energy poverty and cold in an exciting way.”

The book is superbly written, a literary, albeit fast-paced, thriller. Church clearly knows what he is talking about in terms of the relevant science. An exceptionally well-made book. This is a fairly short read, I’m assuming you’ll read it in one sitting and won’t put it down until you’re done.

Note: This book is currently only available in paperback; electronic version follows

A graduate of Stanford Business School and the United States Military Academy at West Point, John Cape is a registered professional engineer and energy consultant.

“In its quest for rapid decarbonization, the United States has hastily phased out fossil fuels, with predictable consequences. The year is 2032, and some climate skeptics are trying to reveal that there is little justification for net-zero policies. The government doesn’t want its citizens to know that its life-changing sacrifices were unjustified. Ignorant of more ominous climate risks, wealthy elites are herding the land’s remains into a primitive future in which humanity will be ill-prepared to avoid extinction. Is there another way? Can our hero and his friends find it in time?”

ABOUT THE TITLE:
“Rifle sights in general can be adjusted to hit what they aim at. When set correctly for a given user, that weapon will be zeroed out. Something that is poorly zeroed and properly addressed will miss the mark. Well, if the goal is to make us poor. Then a well adjusted gun that hits what it aims at could also be considered poorly zeroed.”

ABOUT THE HISTORY:
“This book is based on hard science and speculates on how far things could go if current trends continue. Think of it as an energy version of A Modest Proposal. This novel doesn’t pose as something indistinguishable from the real world. We don’t want the events described here to ever happen, and the fact that they’re already well underway should be a good wake-up call that they’ve gone far enough. If not, read this book and slip into the moccasins of these characters as they grapple with unsettling changes.”

This book is a bit longer, it contains graphics and references. Two climate skeptics meet at a climate science boot camp and share their insights on climate science, IPCC wrongdoing and the implications of zero-zero policy while falling in love. Meanwhile, a progressive family connects with relatives from China and works together to stay alive and survive the ordeal. Everyone struggles to get by without a lot of transportation or emergency power. The book is less about disproving climate science and more about grappling with those who control the narrative.

I find it exciting to see the emergence of the net zero genre in fiction. A near-future dystopian future associated with the dismantling of our energy infrastructure now appears to be unfolding in Europe; If we look 5-10 years into the future, we could be in a really bad place that makes the impact of increasing carbon emissions seem trivial.

Two excellent books to read during the winter solstice or when traveling over the holidays. Not to mention a great last minute Christmas present.