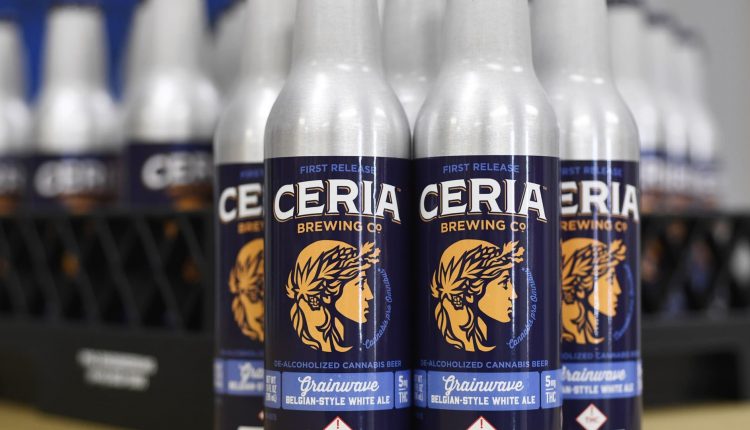 You can smoke it, vape it and eat it. Now as more US states legalize recreational marijuana, companies are betting people will also want to drink it.

Weed-infused beverages are popping up in more places, with major drink makers including Pabst Blue Ribbon and Constellation already pushing into the market. Unlike CBD-infused drinks that have been more widely available in dozens of states, cannabis or weed drinks contain marijuana’s psychoactive component, tetrahydrocannabinol, or THC, which gets people high and is still federally prohibited in the United States.

In recent years, new emulsion technology has made it possible to mix THC into an array of beverages. Now, drink makers are betting that people who don’t want to smoke or vape marijuana or drink alcohol because of health or social reasons can find an alternative in cannabis beverages.

And the market is getting crowded, even in its infancy, according to Amanda Reiman, vice president of public policy research at New Frontier Data, a cannabis firm that tracks consumer habits.

“The choice for consumers was not as wide in the past but now we’ve seen dozens of companies get involved in the cannabis beverage space,” Reiman said.

Leveraging its beer and spirits manufacturing experience, Pabst Blue Ribbon has begun selling a lineup of non-alcoholic “High Seltzers.” Each 12-ounce can contains 10 milligrams of THC, which the company says “is the right amount to have a good time.” Flavors come in pineapple, mango, strawberry and lemon. They’re sold online or at dispensaries in states where medical or recreational marijuana use is allowed.

Other beer and spirit companies to have entered this space include Anheuser-Busch, the maker of Budweiser; Constellation Brands, which makes Modelo Especial and Corona Extra; Lagunitas Brewing Company; and Ceria. The lineup of weed drinks contains varied doses of THC — generally anywhere from 2.5 milligrams to 10 milligrams — mixed only with water-based drinks. The mixing of cannabis and alcohol is prohibited in most states that allow cannabis use.

Brightfield Group, a cannabis research agency, estimates that cannabis beverages overall will account for $1 billion in US sales by 2025.

Getting into the weeds

While beverages only represent about 1% of overall legal cannabis sales in the US, that just means the market has a lot of space to grow, according to Travis Tharp, the CEO of Keef Brands, which makes an array of cannabis products.

“There have been multiple false starts for announcing beverages the next big thing,” Tharp said. “But I think we’ve gotten to a point where we are showing that the year over year growth is something that is substantial.”

Keef, based in New York, has expanded to eight states where recreational weed has been legalized, as well as Canada and Puerto Rico. Among the company’s products is a 100-milligram mocktail that Tharp compared to a hard bottle of alcohol.

There are experts who worry such higher-dose THC in drinks could pose serious health risks. Despite cannabis beverage brands often being touted for their wellness benefits or for being hangover free, there has been a lack of government-funded research about them.

Too much of anything can be bad, doctors warn.

“THC can increase the risk of paranoia, anxiety, and even psychosis and hallucinations,” said Charles Michael White, department head of the University of Connecticut’s School of Pharmacy. “The higher the dose, the greater the risk and severity of these adverse effects.”

White said consuming cannabis in liquid form still comes with a lot of unknowns. It falls somewhere in between inhaling cannabis, which gives an immediate high that leaves the body quickly, and eating it, which remains in the bloodstream longer for a slower, calmer high.

With cannabis beverages, he said the high can be intense and unpredictable, especially if too much of the drink is consumed in a short amount of time.

A need for more research

Tharp added that the market for THC beverages has been hampered by a lack of research into responsible consumption, as well as few standardized policies and best practices.

“There’s not a lot of research that can be performed on it because cannabis is a schedule one drug in the US,” he said, adding that this is one of the main roadblocks keeping the industry from joining the mainstream more quickly.

A schedule one drug is a substance that has no currently accepted medical use in the United States and has a high potential for abuse.

Reiman, of New Frontier Data, agrees. If legalized federally, she said the Food and Drug Administration would be studying and regulating THC beverages. That could put wary customers at ease and entice new ones to take a sip.

In addition to limiting research, today’s federal cannabis prohibition means cannabis beverage makers are largely operating under a patchwork of state laws, creating a disjointed supply chain. This keeps many companies from growing in a significant way, which has led to some pulling back on their efforts in the market and others giving up completely.

Earlier this year, Anheuser-Busch announced it ended a partnership associated with manufacturing CBD and THC beverages. The company said it remains focused on commercializing CBD-infused non-alcoholic beverages in Canada and will continue its research on non-alcohol beverages containing THC through its subsidiary Fluent, according to Hemp Today. Anheuser-Busch did not respond to CNBC’s request for comment.

With states including New York and New Jersey formulating plans for recreational markets, there’s still potential for reaching more consumers. And as laws evolve in more mature state markets like California, there’s a push for cannabis beverages to be sold alongside alcohol at lounges, clubs, restaurants and even grocers.