Unemployment falls however is increased for Black, Hispanic employees 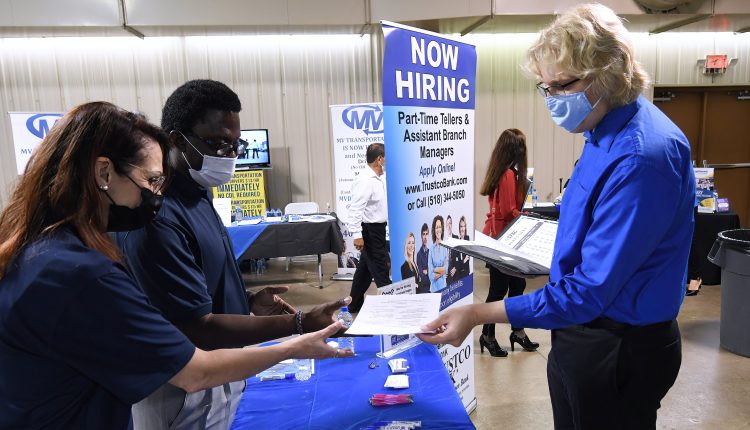 A man hands his resume to an employer at the 25th annual Central Florida Employment Council Job Fair at the Central Florida Fairgrounds. More than 80 companies were recruiting for over a thousand jobs.

The unemployment fell to 5.4% as the economy added 943,000 jobs in July, with strong gains across demographic groups despite persistent inequalities in the labor market.

Black and Hispanic unemployment dropped to 8.2% and 6.6% respectively, but the figures are high compared with the jobless rate for whites and Asians. Joblessness for whites was the lowest at 4.8% and for Asians, it declined to 5.3%.

Those figures represent a broad improvement over June, when the overall unemployment rate was 5.9%. Broken down by group, it was 9.2% for Black people, 7.4% for Hispanic workers, 5.8% for Asians and 5.2% for whites.

The overall labor force participation rate, or share of people working or looking for work, was largely unchanged. However, it actually declined slightly for Black people, indicating that the drop in unemployment may have been due in part to some Black workers dropping out of the labor force.

Still, Black people are participating in the labor force at close to the same rate as whites, yet they earned 23% less on a weekly basis at $799 compared with $1,012, according to median wage data from the Bureau of Labor Statistics for the second quarter.

Hispanics, who participate in the labor force at a higher rate than any other demographic group, earn 26% less than whites on a weekly basis at $779. Asians are the highest earners overall, with median weekly wages of $1,281.

Black and Hispanic workers are disproportionately represented in lower-wage industries, such as transportation and warehousing as well as leisure and hospitality.

For example, Black workers represent about 13% of the U.S. labor force, but 21% of all workers in transportation and warehousing. Hispanic workers are 17% of the labor force, but comprise 24% in the leisure and hospitality industry.

Asian men were the highest earners overall with median weekly wages of $1,473.

The overall employment trend is moving in the right direction as the economy recovers from the pandemic, according to Heidi Shierholz, former chief economist with the Labor Department under the Obama administration.

“Because people of color were disproportionately hit by this downturn, as we’re recovering from this, workers of color see disproportionate gains,” said Shierholz, senior economist and policy director at the liberal-leaning Economic Policy Institute.

Evaluating the Pre-1900 World to Right this moment – Watts Up With That?

Listed below are the roles for January 2023 – in a chart