Snowboarding now not assured over the Christmas holidays – even with snow cannons – Watts Up With That? 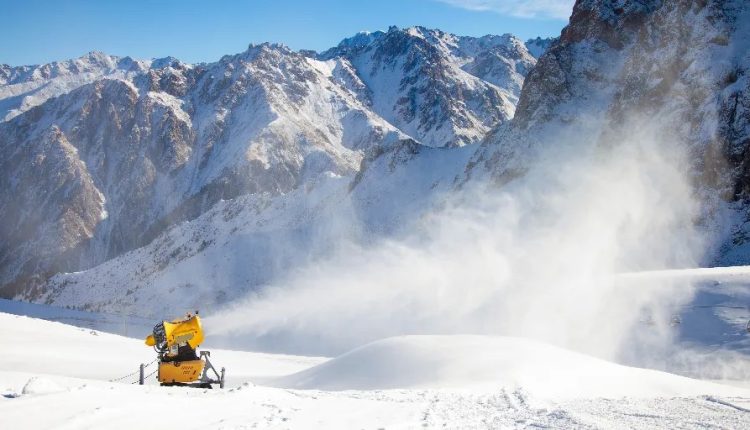 For many, holidays in the snow are part of the end of the year like a Christmas tree and fireworks. However, as global warming progresses, white slopes are becoming increasingly rare. Researchers from the University of Basel have calculated how snow-reliable one of the largest ski areas in Switzerland with technical snowmaking will remain up to the year 2100 and how much water this snow uses.

The future of skiing in Switzerland looks anything but rosy – or rather white. Current climate models predict that there will be more precipitation in winter in the coming decades, but that it will fall as rain rather than snow. Nevertheless, an investor recently invested several million francs in the expansion of the Andermatt-Sedrun-Disentis ski area. A short-sighted decision that you will regret in the future?

A research team led by Dr. Erika Hiltbrunner from the Department of Environmental Sciences at the University of Basel has now calculated to what extent this ski area can maintain its economically important Christmas holidays and a ski season of at least 100 days with and without snowmaking. The team collected data on the condition of the slopes, where and when the snow is produced in the ski area and with how much water. They then applied the latest climate change scenarios (CH2018) in combination with the simulation software SkiSim 2.0 for projections of snow conditions with and without artificial snowmaking. The results of their investigations were recently published in the International Journal of Biometeorology.

No guarantee of a white Christmas

According to this, the use of technical snow can actually guarantee a 100-day ski season – at least in the higher elevations of the ski area (from 1,800 meters). But in the coming decades, business is likely to get tight during the Christmas holidays, as the weather is often not cold enough at this time and in the weeks before. In the scenario with undiminished greenhouse gas emissions, the Sedrun region in particular will no longer be able to guarantee snow over Christmas in the longer term. New snow cannons could alleviate the situation to some extent, the researchers say, but won’t completely solve the problem.

“Many are not aware that you also need certain weather conditions for snowmaking,” explains Hiltbrunner. “It must be neither too warm nor too humid, otherwise the evaporative cooling is not sufficient for the sprayed water to freeze in the air and fall down as snow.” Warm air absorbs more moisture and so it becomes more and more difficult as the winters get warmer technically impossible to produce snow. In other words: “Here, the laws of physics set clear limits for snowmaking.”

Skiing will continue, however, because the technical snow-making facilities at least enable the operators of the ski areas to keep the higher slopes open for 100 consecutive days – even until the end of the century and with unchecked climate change. But there is a high price to pay for this. The researchers’ calculations show that water consumption for snowmaking will increase significantly, by around 80% for the entire ski area. In an average winter towards the end of the century, consumption would thus be around 540 million liters of water, compared to 300 million liters today.

However, the researchers emphasize that this increase in water demand is still relatively moderate compared to other ski areas. Earlier studies had shown that, for example, the water consumption for snowmaking in the Scuol ski area would increase by a factor of 2.4 to 5 because the snow-covered area there has to be expanded significantly to ensure snow security.

For their analysis, the researchers looked at periods of 30 years. However, there are large annual fluctuations: In addition, extreme events are not shown in the climate scenarios. In the snowless winter of 2017, water consumption for snowmaking in one of the three sub-areas of Andermatt-Sedrun-Disentis tripled.

Conflicts over water use

Today, part of the water for snowmaking in the largest sub-area Andermatt-Sedrun-Disentis comes from Lake Oberalp. A maximum of 200 million liters may be withdrawn for this purpose each year. If climate change continues unchecked, this water source will last until the middle of the century, after which time new sources will have to be tapped. “The Oberalpsee is also used to generate electricity from hydropower,” says Dr. Maria Vorkauf, first author of the study, who now works at the Agroscope research station. “Here we probably see a conflict between the water needs of the ski resort and those of hydroelectric power generation.”

This ski area could even initially benefit from climate change – if lower-lying and smaller ski areas have to be closed, tourists will migrate to larger higher-lying resorts, including Andermatt-Sedrun-Disentis.

What is certain is that increased snowmaking will drive up the costs and thus also the prices for skiing holidays. “Sooner or later, average earners will simply no longer be able to afford them,” says Hiltbrunner.

The danger of a harmful new Covid variant in China is “fairly low,” says the US well being knowledgeable