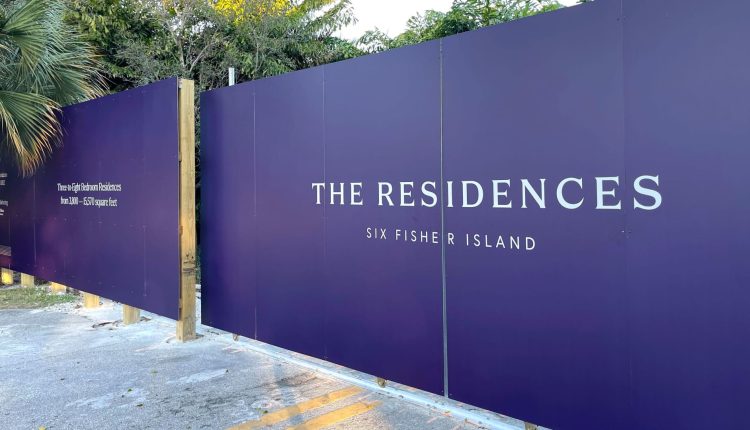 Just off the shore of Miami Beach, on the ultra-exclusive Fisher Island, a crane sits at a construction site. It’s the last lot available for development and an unlikely bet on luxury real estate at a time when the housing market appears to be in free fall.

Jorge Perez, also known as “the condo king of Miami,” and his Related Group are behind the 10-story, 50-unit project, which has a $1.2 billion sell-through price. They paid $122.6 million for the country at the top of the market.

Units start at $15 million. The project includes a $90 million 15,000 square foot penthouse and a $55 million ground floor mansion with a .2 acre backyard. The building will also have its own slipway for mega yachts. The sale just started last month.

“Nearly 30% of the units are taken,” Perez said. “There were $300 million in deals and we didn’t really do any marketing. Should the market nevertheless slow down a bit, we are in a fortunate position.”

Buyers must pay a 50% non-refundable deposit for pre-construction sales.

According to Perez, the first buyers will come from Brazil, New York, Canada, Mexico and Israel. He said he sees far more domestic interest than in the past since Miami has traditionally been a haven for foreign investors. That seems to resonate throughout the city.

The view of South Florida

“Miami is an internationally oriented market — 80-90% international — but it’s flipped during the pandemic,” said Danny Hertzberg, a luxury real estate agent at Coldwell Banker and Jills Zeder Group. “We will continue to have this domestic demand for fiscal reasons, but eventually political instability or a weaker dollar will follow [international] people in.”

Miami has been an outlier in the recent drop in both home sales and prices, with prices still quite high in the city. However, the high-end wasn’t as resilient. According to Miller Samuel, a real estate appraisal firm, pending sales for homes priced over $5 million fell 89% in December from a year earlier.

“But the one thing to keep in mind about Miami is that inventories are down 60% since pre-pandemic times. So the difference is that inventory is extremely limited,” noted Jonathan Miller, the company’s CEO. “It throws a lot of conventional wisdom about pricing out of whack.”

Miller added that the Fisher Island project “may not sell in five minutes, but it’s not out of the question even in this market.”

The property and its location are both unique. Accessible only by ferry or yacht, Fisher Island is a 216-acre, ultra-exclusive community open only to residents, their guests, and guests at the small luxury hotel there. The last condo sold on the island last year cost $40 million, according to a Related Group representative.

Hertzberg said Perez’s new building “checks a lot of boxes” for wealthier shoppers, who have had a new mindset since the pandemic began.

“They want convenience, privacy and security. That’s an important factor there. You want convenience. There is a private school there. Their own restaurants, their own grocery stores. A private beach,” Herzberg said.

He also noted that the immediate inclusion in the golf club is a huge draw for residents. He said that in the Miami area there is a five to seven year waiting list to join a golf club.

“I’m sure they will sell out. The question of when that happens is what’s happening in the economy and how aggressively they are pricing,” Hertzberg said. “If I were to bet they would be at the top of the list. It just has the right elements for the economy and the world we are in.”

What the future may bring

Perez, who has developed hundreds of properties in South Florida and weathered the massive condo collapse during the Great Recession, didn’t seem at all concerned about the future of his new venture.

“Yes, the market across the country has declined, particularly in luxury units, but we find that in enclaves like Fisher Island we still see a lot of interest from those who can afford the best. ‘ Peres said.

“Of course it bothers me. It bothers me every day. I wake up every day thinking you know what’s going to happen in the economy,” Perez said. “We think interest rates and inflation have peaked. In my opinion, we’re going to have a tough year for a year, a year and a half, two years. And we’re ready to weather this storm should it happen.”

If Perez gets $90 million for the penthouse, it will be the most expensive condo in all of South Florida.

Calls to ban fuel stoves are anti-science, anti-liberty and anti-energy