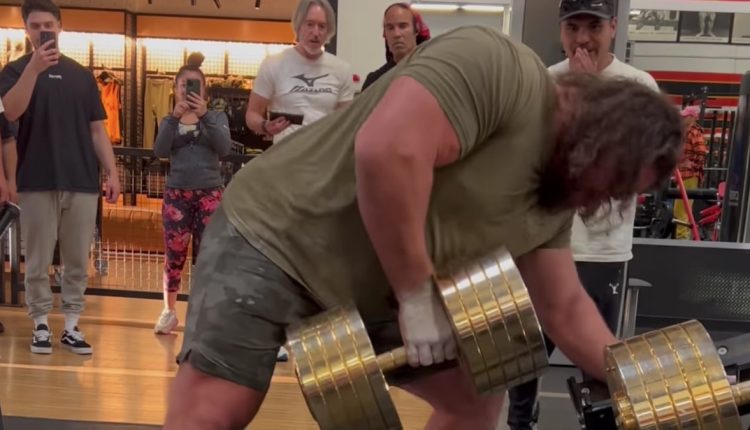 The WSM didn’t even have to use a sling.

Strongman athlete Martins Licis has multiple awards to his credit. The 2019 World’s Strongest Man is also the 2021 Rogue Invitational Winner and the 2022 Arnold Strongman Classic Champion. Licis always tests his strength in a variety of ways, and on his recent visit to Gold’s Gym Venice, California, he pitted his grip against the world famous golden dumbbells to the test.

As seen at the 8:56 mark in the Youtube video posted to Licis’ channel, he managed to perform a one-arm row using one of the 150-pound dumbbells for a quick first rep, followed by two more Reps after a very short rest to grab the weight again. Watching from behind was Licis’ mentor and noted legend of grip strength, Odd Haugen. After an indefinite rest period, Licis then did a second set and got five reps. Both sets were performed with only chalk on their hands and without the aid of a sling.

Licis and his business partner Romark Weiss originally went to the legendary bodybuilding gym with the challenge of getting members to lift the legendary Thomas Inch barbell to a standing position using just one hand. The legendary inch dumbbell weighs 77 kilograms (170 pounds) and has a handle almost two and a half inches thick. Licis offered $100 to anyone who could complete the challenging lift, and two men managed to pull off the feat.

There is no official list of people who have lifted weights with the Golden Dumbbells, but those who have done so on camera include 2022 Arnold Classic British bodybuilding champion Andrew Jacked and the social media Personality Jake Johns (aka Big Boy) performing a single arm row for 10 reps with the dumbbell. However, they used straps while Licis did not.

Licis has had a busy 2022 season, winning the Arnold Strongman Classic in Columbus, OH in March, followed by a second place finish behind Tom Stoltman at the 2022 World’s Strongest Man Contest in Sacramento, CA. Licis then took fourth place at the 2022 Rogue Invitational Strongman Contest in Texas. The champion at this event was Oleksii Novikov.

Licis’ plans for 2023 have yet to be determined. He had previously said he would like to aim for challenging world records and he is unsure if he will compete in major competitions. His last competitive appearance was a short-term entry in November 2022 to replace Robert Oberst as captain of Team USA against Team UK in the 2022 Giants Live World’s Strongest Nation competition. Team UK, led by Eddie Hall, the 2017 World’s Strongest Man, won this competition.