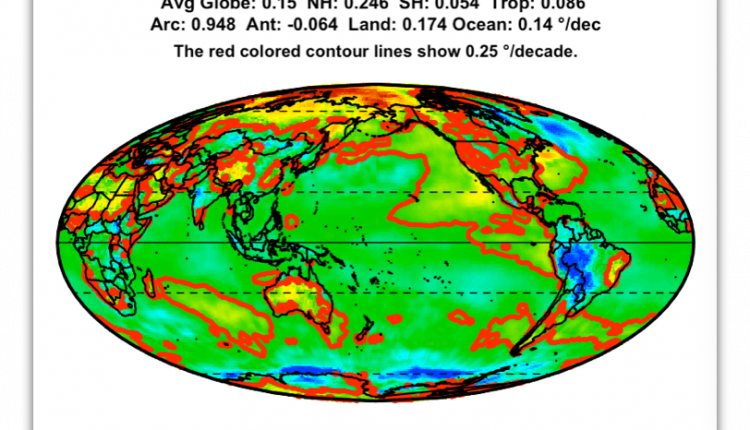 My thoughts turn to curious things. Today we went to this one of Aesop’s fables:

A man and a satyr once poured libations to make an alliance between them. On a very cold winter day when they were talking, the man put his fingers to his mouth and blew on them.

When the satyr asked why, he told him that he did it to warm his hands, they were so cold.

Later that day they sat down to eat, the food they prepared was quite scalding. The man lifted one of the dishes a little towards his mouth and blew into it. When the satyr asked again why, he said that he did it to cool the meat, it was so hot.

“I can no longer consider you a friend,” said the satyr, “a fellow who blows hot and cold with the same breath.”

What reminded me was looking at temperature trends for the planet. I’ve always assumed that the temperature trend varies a little around the world. But I was surprised to see how much of the world was cooling. Here is a Pacific and a corresponding Atlantic-centered view of the cooling:

I expected some of that. The Southern Ocean, for example. But I certainly would not have thought that most of South America would be one of the fastest cooling areas on the planet.

The odd thing here is that almost all of the North Atlantic is cooling … I didn’t see this coming. The same applies to the middle of the Indian Ocean.

Autumn In Nice Britain Eire has not warmed up since 1995…

Fascinated by it, I thought I’d check out the hot spots accordingly. Here are the same views, but this time with areas warming faster than 0.25 ° / decade.

The entire eastern Pacific is warming rapidly … as is the center of the southern Indian Ocean. And Australia has it in the spade.

My best to everyone. I will be staying up late on New Years Eve but not welcoming 2021.