Mapping the complete ocean ground – from the sky? 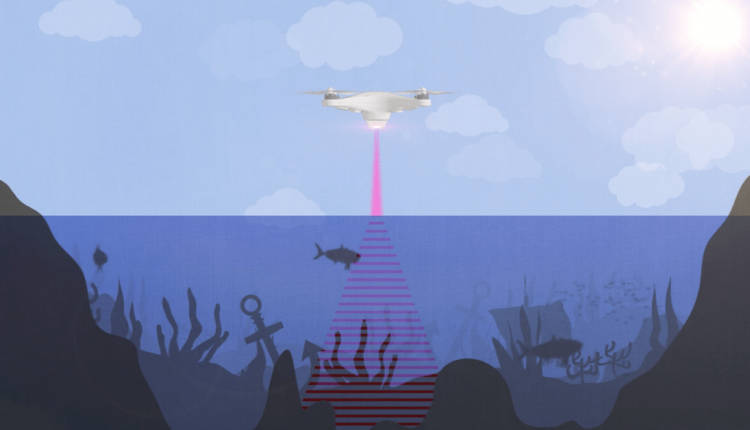 A friend of mine who works in game design recently showed me a 3D model of the earth that has been rendered in great detail using topographically accurate satellite data so that we can fly at high speed through canyons and our respective neighborhoods like a pair of super people. “Let’s see if we can go underwater,” he said enthusiastically as we flew over the Pacific.

We could not. The amazingly accurate model on land apparently had no data with which to model the underwater environment. There was an unrendered void beneath the glassy surface of the water, like this was a sub-aquatic version of the Truman Show, and we had reached the end of the world.

Neither of us was particularly surprised. The shock would have been if the oceans had been rendered. Where would this information have come from? And how exactly would it have been? It would have meant that the makers of the model knew something that even the world’s leading oceanographers don’t.

Despite all the justified excitement surrounding space exploration in the 2020s (Elon Musk is “very confident” that humans will be racing towards Mars by 2026), our planet’s oceans remain a largely unknown and unknown domain that is much closer to their home lies. Water covers roughly 71 percent of the earth’s surface, with the freshwater material we drink making up a tiny 3 percent, little more than a rounding error. But the vast majority of Earth’s oceans – up to 95 percent – is an unexplored mystery.

While we’re still far from a Google Street View equivalent for the underwater world, a new project carried out by researchers at Stanford University could pave the way for something like this in the future – and much more. Imagine if you could fly an airplane over a piece of water and see with absolute clarity what is hiding under the waves.

It sounds impossible. As it turns out, it’s just very, very difficult.

“Mapping underwater environments from an airborne system is a challenging task, but it has many potential applications,” Aidan James Fitzpatrick, a PhD student in the electrical engineering department at Stanford University, told Digital Trends.

The obvious candidate for this imaging job is lidar. Lidar is the bounce laser technology best known for helping autonomous vehicles (without Tesla) perceive the world around them. It sends out pulsed waves of light and then measures how long it takes for them to bounce off objects and return to the sensor. In this way, the sensor can calculate how far the light pulse has moved and thus create an image of the world around it. Self-driving cars are still the most popular use of lidar, but they can also be used as a powerful mapping tool in other contexts. For example, researchers used it in 2016 to uncover a long-lost city hidden under a dense canopy in the Cambodian jungle.

Lidar is not suitable for this type of assignment. Although advanced, high-performance lidar systems perform well in extremely clear waters, much of the ocean – especially coastal waters – is cloudy and opaque. According to Fitzpatrick, much of the underwater recordings made to date have relied on in-water sonar systems that use sound waves that can easily travel through murky waters.

Unfortunately there is a catch here too. In-water sonar systems are mounted on or pulled by a slow moving boat. Aerial imaging with a flying aircraft would be more effective as it could cover a much larger area in less time. However, this is impossible because sound waves cannot get from the air into the water and then back again without losing 99.9999 percent of their energy.

What comes to PASS

The Iranian nuclear scientist is claimed to have been…

While lidar and radar systems have mapped the entire landscape of the earth (focus on the “land”), consequently only about 5 percent of global waters have been subject to similar imaging and mapping. This corresponds to a world map that only shows Australia and leaves the rest dark like an unexplored Age of Empires map.

“Our goal is to propose a technology that can be mounted on a flying vehicle to provide extensive coverage while using an imaging technique that is robust in murky water,” said Fitzpatrick. “For this purpose, we are developing a photoacoustic air sonar system that we have designed. PASS uses the advantages of the propagation of light in the air and the propagation of sound in the water to map underwater environments from an airborne system. “

PASS works as follows: First, a special customer-specific laser system fires a burst of infrared light that is absorbed by the first centimeter of water. Once laser absorption has occurred, the water thermally expands and creates sound waves that can move into the water.

“These sound waves now act as a sonar signal in the water that was generated remotely by the laser,” continued Fitzpatrick. “The sound waves are reflected by underwater objects and travel back to the surface of the water. Some of this noise – only about 0.06 percent – passes the air-water interface and travels towards the air system. Highly sensitive sound receivers or transducers record these sound waves. The converters [then] convert the sound energy into electrical signals that can be passed through image reconstruction algorithms to create a perceptible image. “

The things that are below

PASS is currently in progress. The team demonstrated high-resolution three-dimensional imaging in a controlled laboratory environment. Fitzpatrick acknowledged that this is in a “container the size of a large aquarium,” although the technology is now “close to the stage” where it could be deployed over a large swimming pool.

There is, of course, a slight difference between a large swimming pool and all of the world’s oceans, and it requires a lot more work. Specifically, a major challenge that needs to be resolved before testing in larger, more uncontrolled environments is how to approach imaging through water with turbulent surface waves. Fitzpatrick said this is a head scratcher, but it’s one that “certainly has workable solutions” that some are already working on.

“PASS could be used to map the depths of unknown waters, study biological environments, search for lost wrecks, and possibly much more,” he said. “Isn’t it strange,” he added, “that we don’t have to explore all of the earth we live on yet? Maybe PASS can change that. “

The combination of light and sound to solve the air-water interface would be a game changer. And then? Bring the mapping drone army to finally show us what’s under the ocean’s surface.

An article describing the PASS project was recently published in IEEE Access magazine.

Who’s accountable if a self-driving automotive has an accident?